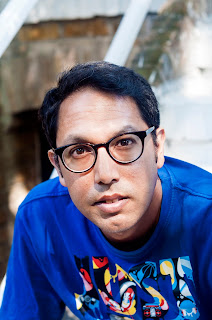 A poem from Rishi Dastidar’s Ticker-tape was included in The Forward Book of Poetry 2018. His second collection, Saffron Jack, is published by Nine Arches Press. He is also editor of The Craft: A Guide to Making Poetry Happen in the 21st Century (Nine Arches Press).

One of my biggest sins is having…. a gajillion titles on the go. Right now, the one that is most determinedly hovering in my eyeline is Friday Night Lights by HG Bissinger, for a sports book club I’m a member of. It’s what the TV show was based on, and I’m a sucker for reading most things about American football, as it is for my sins probably the sport I care most about.

Vikram Seth’s The Golden Gate, his verse novel inspired by Pushkin’s Eugene Onegin. It’s a tale of yuppies in 1980s Silicon Valley, before it became the cradle of the modern world, for good or ill; it is charming, witty, bright and yet at the same time has a deep undertow of melancholy too. I am incapable of leaving one on the shelf if I ever see it in a charity shop. Most of these inevitably get passed on, though I think I have three copies at the moment, so if anyone wants one, let me know…

Apart from the aforementioned Golden Gate, I do end up re-reading Maggie Nelson’s Bluets once a year. If I could do something like that, I would put my pen down, as that would be me done. It’s a thrilling reminder of what can happen when you’re bold enough to discard form, and follow your nerve.

Oh so many… let’s say the one I feel guiltiest about is Moby Dick. Maybe this year…

The Fatal Englishman by Sebastian Faulks; it’s a really intriguing biography of three Englishmen who died young, but were exemplars of both how society and an idea of Englishness was changing in the 20th century. I think it’s so overlooked I persuaded John and Andy at the Backlisted podcast to do an episode about it.