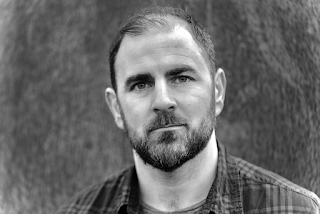 Niall Bourke is originally from Kilkenny but now lives in London, He writes both poetry and prose and has been published widely in magazines and journals in both the UK and Ireland, including The Irish Times. His poems and short stories have been listed for numerous awards, including The Costa Short Story Award, The ALCS Tom-Gallon Trust Award, The Mairtín Crawford Short Story Prize and The New Irish Writing Award. In 2017 he was selected for Poetry Ireland's Introductions Series. His debut poetry collection 'Did You Put The Weasels Out?' was published by Eyewear press in April 2018. In spring 2021 Tramp Press will be publishing his debut novel, ‘Line’. He is represented by Brian Langan at Storyline Lit Agency.

Huckleberry Finn (again) and A Line Made by Walking by Sara Baume. I’m enjoying both, but the concentration is a little shot at the minute so the going is slow.

A book I’ve recommended a lot lately (and don’t have a copy anymore as I received it from a friend and then passed it to another) is Sombrero Fallout by Richard Brautigan. An ice-cold sombrero falls out the sky and whoever picks it up will become mayor…It’s got one whole chapter about an avocado sandwich and another called ‘Meanwhile, back in the wastepaper basket’ and an introduction by Jarvis Cocker. Lots to like!

Hmm... probably a few I could choose from here but two spring to mind; The Alchemist by Paulo Coelho and Shantaram by Gregory David Roberts.Noy for me.

I’m quite looking forward to getting my hand on Susannah Dickey’s Tennis Lessons. I’ve read her last few poetry pamphlets and they’ve really whetted my appetite to see what she’ll do in the longer form.

Again, probably a few to choose from here too, but Pereira Maintains by Antoni Tabbuchi stands out as a great book I don’t seem to hear much about.