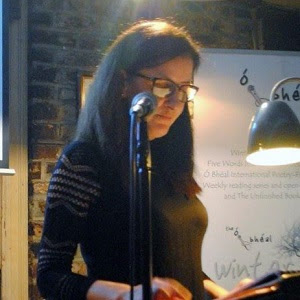 Chris Murray lives in Dublin. She founded and curates Poethead, a website dedicated to platforming work by women poets, their translators, and editors. She is an active member of Fired! Irish Women Poets and the Canon which seeks to celebrate and draw awareness to the rich cultural heritage of Irish women poets through readings. Her forthcoming book ‘Gold Friend’ is due in Autumn 2020 (Turas Press, Dublin).

Breasts And Eggs by Mieko Kawakami which I spotted via Tammy Lai-Ming Ho’s Twitter and I pre-ordered it. So glad! A beautiful book with gorgeously drawn characters. I am very taken with Kawakami’s drawing of Midoriko’s character. I have not finished the book yet, so I will say no more. I have been re-reading Object Lessons by Eavan Boland (RIP) and some essays by Simone Weil. I don’t tend to read large quantities of fiction, as it doesn’t appear to be my metier. I am drawn to essays, non-fiction, history and biography. I still haven’t got my hands on ‘Making Integral’ Essays on Richard Murphy (CUP), having not been into town for a while now.

I read and re-read a biography of Dame Alicia Markova when I was a child. I don’t know who wrote it or where it came from. I suspect that my mum had bought it at the old music library or at a library sale. I knew every detail of her dances and costumes because I read that book to pieces. I was obsessed with Markova’s world which was a hugely fascinating place to be in.  I love detail. I would go back to books on Markova, or on Mary Queen of Scots because of the exhaustive costume and historical detail, which I needed. The books were worn out when I eventually put them down, or moved into my first place. I have not seen either of the books since.

This is a draw! I have read The Secret History by Donna Tartt a few times, same with A.S Byatt’s Possession, and Elizabeth Barrett-Browning, A Biography, by Margaret Forster. I think that Dora Van Gelder’s The Real World Of Fairies is a book that would devastate me if it were lost. Not least because it was a final gift from a very good friend, who, before his passing, always knew what book to recommend to me when I visited and who had kept copies of Edith Sitwell’s and Doris Lessing’s books for me in a special shelf in his library. The copies of the Sitwells and Lessings were likely first print-runs, and it was nice to be thought of and considered in terms of the reading that I would enjoy, and not alone as a house-guest and extended family member.

I have not been able to bring myself to finish The Letters Of Sylvia Plath, Volume 2, 1956-1963. I read a lot about the volume in the media, and as I proceed through the book the tortuous inevitability of the ruination of the Plath/Hughes marriage becomes more stark. It is a claustrophobic book. I often find myself headache-y or gasping for breath in VAW scenarios both implicit and explicit. Part of me prefers to read the poems (which I can do again and again) because they are transformative. Separating the art from the life in Plath’s case is almost a necessity, we can watch her create from the raw material of her life, but I find the bruised body, the miscarriage, and the descent of her psyche into her final days unbearably sad. I am not sure if I have the bravery to finish it, maybe it is a way of honouring her - I am not sure.

I thought about this and there are a few. The Dora Van Gelder resonates, but I am going to say Eavan Boland: Inside History which I contributed to. I wrote the chapter  “A Modern Encounter With Foebus Abierat” - based on Eavan Boland’s translation of “Phoebus was gone, all gone, his journey over” which I felt encapsulated Eavan Boland’s ideas as a woman and a poet. The kernel of the translation is of female transgression against the established order. Eavan asked to meet me and was delighted with the essay. I think meeting her meant so much to me as a poet and we remained in touch over the last four years of her life, through committee work, or meetings, or emails. She picked me up after a bad burn-out and I am very grateful to have known her. We need to talk about her interventions in the areas of equality and diversity. I am linking the poem here.