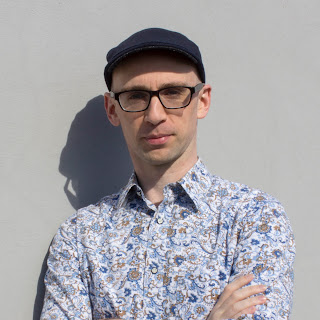 Colin Hassard is a poet from Banbridge. He was Runner Up in the Seamus Heaney Award for New Writing 2018 and short-listed for the Aurivo North West Words Poetry Competition 2019. As well as winning many poetry slam awards, Colin is a regular poetry contributor to BBC Radio Ulster and has performed his work on Sky One. His debut poetry collection will be released in 2021 with Doire Press.

I’ve just started reading Sinead Morrissey’s On Balance. I’m a little behind the times as the collection was released in 2017 – it actually won the Forward Prize for Best Collection that year – but, as they say, better late than never. I’ve also just finished reading Eric Idle’s autobiography Always Look on the Bright Side of Life. Even if you’re not a fan of Monty Python, it is a fascinating read, and Idle writes quite candidly about his life from troubled and tragic childhood right through to superstardom and beyond.

Liked most children I loved Roald Dahl’s books, not just for the wonderfully imaginative stories, but also the illustrations by Quentin Blake. However, if I had to pick a non-Dahl book, I’d go for Dangleboots by Dennis Hamley. It’s about a young boy who isn’t very good at football until he buys a new pair of boots from a mysterious market-stall, which turn out to be magic boots that make him into an amazing footballer. But then, of course, things start to go wrong. It connected with me as I was a boy who wasn’t very good at football and who dreamed of finding some magic boots which, sadly, never happened. These days I’m on the lookout for a magic pen!

Just to give you a little insight into my mild OCD, my bookcases are divided into genres, and each genre is an alphabetical order! So, my solitary shelf of novels starts with Colin Bateman and ends with Oscar Wilde. And my poetry shelves start with Maya Angelou and end with Benjamin Zephaniah. Some of the smaller genres, like sport and history are thrown in together but my reading room is basically a smaller version of Waterstones!

As you may have gathered from my previous answer, my main genre of interest is poetry. However, there is a collection of short-stories by Irvine Welsh called The Acid House that I read at least once a year. I’ve struggled with Welsh’s novels – although I do love is work on the big screen – but the short stories are brilliant. However, if anyone decides to check them out based on my recommendation, I should warn them that some of the stories are not for the faint-hearted. They may also put you off ever visiting Scotland.

I only noticed John Fante’s Ask the Dust in a bookstore because, and I realise this is breaking one of life’s primary maxims to not judge a book by its cover, but cover and title had similar art-work and font to some of the Charles Bukowski books I have. I’m a fan of Bukowski and, as it turns out, Bukowski was a huge fan of Fante – even going so far as to call him “my god”. Ask the Dust was published in 1939 and is the semi-autobiographical story of a struggling Los Angeles based writer during the Great Depression. In an interesting bit of trivia, the book wasn’t properly distributed at first because the publisher was embroiled in a legal battle over an unauthorised publishing of Hitler’s Mein Kampf and couldn’t afford the Ask the Dust distribution! So, it wasn’t until Bukowski championed Fante’s work in the 1970’s that eventually lead to the novel being reissued in 1980. Yet even then, Fante’s work is somewhat overlooked as his themes, and arguably style, were used to much greater affect a little later by the Beat generation, and even by Bukowski himself. It’s well worth exploring though.
Posted by Colin Dardis at 11:28