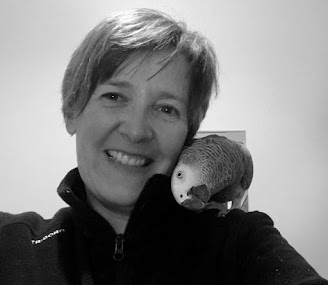 Trish Bennett writes about and the shenanigans of her family, and other creatures.  She’s performed at events in Ireland and the UK including Cúirt, North West Words, RTÉ, and BBC Radio Ulster.  In 2019, Bennett’s micro-pamphlet, Borderlines, was published by Hedgehog Poetry Press, and she received a SIAP Award from the Arts Council of Northern Ireland.

I’ll be killed when my to-be-read pile falls on me. So be it. As far as I’m concerned, you can never have too many books. You need a book for every mood, and these days, there are many  moods. There's a stack in progress at any one time and a whack borrowed from the library on Libby. The daughter has got me into Kurt Vonnegut.  She knew I’d love his quirky satirical style. I’ve just finished Slaughterhouse Five and am now tackling Breakfast of Champions. So it goes.

Among my current stack is Selected Stories by Brian Friel. I love the way he said a thing, without saying anything. I find it fascinating to read the short stories that were the precursors to some of his most famous plays e.g. Dancing at Lughnasa.

Another one of my favourites in the stack is Imaginary Bonnets with Real Bees in Them, Paula Meehan’s stunning book of lectures from when she was Ireland Chair of Poetry.  Maureen Boyle knew I was a Paula fan, and told me about this book. She said I’d love it, not just for the poetry, but also because I’m a beekeeper.  She was right.

When I was under ten, the only tablets we had were forced into us under the threat of the wooden spoon.  Books were our escape from boredom on a wet day. I never had a favourite because I read so many, each one became the new favourite, until the next page-turner came along. We got our books from the local library. It was up the street in a portacabin on the grounds of the Primary School and open two days a week. The Children’s section was on the two bottom shelves. It was mostly Enid Blyton. I loved The Magic Faraway Tree Stories. I wanted to live in that tree.  As I pushed towards the teens, I was big into Malory Towers, and The Nancy Drew Mysteries.  I loved solving mysteries.  Dad hid stuff in our yard and gave me notes with clues to solve the puzzle or find the treasure.

My favourite of all the detective stories was The Three Investigators mystery series by Robert Arthur.  I don’t even remember the stories now but I still want that cool secret headquarters, a huge trailer filled with gadgets.  There was even a telephone.  When I grew up (in the dark ages), having a telephone in your secret hideout was a big deal. The Investigators den was hidden under piles of scrap in Uncle Titus’s scrapyard with a secret entrance and exit.  It was all so exotic.  I wasn’t even cool enough to have an Uncle Titus.

That They May Face the Rising Sun, by John McGahern. It’s a while since I’ve read this masterpiece of a novel, yet it’s never left me. On a personal level I can identify with the rural area described by McGahern as I grew up in the country lanes of North Leitrim.

It’s a book that takes a slow ramble, the prose is beautiful, poetic… "Happiness can not be sought or worried into being, or even fully grasped; it should be allowed its own slow pace so that it passes unnoticed, if it ever comes at all."

I’m currently sitting up in the small hours laughing to myself as I read The Best of John B. Keane, Collected Humorous Writings, a book that I’d bought for Dad years ago.  In my teens, I’d read Dad’s collection of John B Keane books, and saw his plays, The Field, and Sive, at our local Drama Festival. Keane was such a sharp observer of the human condition.  No more my own Father, he could turn anything into a witty story.

I’ve been a huge fan of Nora Ephron ever since my mother-in-law, Moira, insisted I read I Feel Bad About My Neck.  I can identify with a lot of what Nora said now I’m at that age where ‘I remember nothing’:

"I have been forgetting things for years—at least since I was in my thirties. I know this because I wrote something about it at the time. I have proof. Of course, I can't remember exactly where I wrote about it, or when, but I could probably hunt it up if I had to."

My favourite anthology of hers is The Most of Nora Ephron, a collection of snippets from her screenplays e.g. When Harry Met Sally, and her most famous essays.  Nora had a fierce unapologetic wit and left us far too soon.