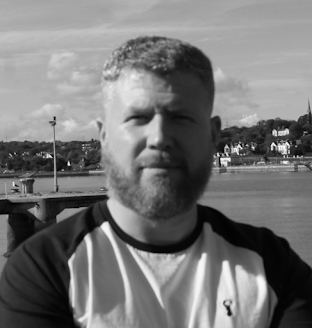 Ruairí de Barra is from Co. Mayo and now resides in Co. Cork. He is a sailor, an award-winning military journalist, and a poet. His creative work has featured with Tinteán, A New Ulster, Live Encounters, Bangor Literary Journal, The Ranthology Anthology, Black Bough Poetry, The Boston Globe, Boston Accent, and all his work can be read on www.paperneverefusedink.com. Follow on: Twitter: @r_debarra @never_ink and Facebook.

The books that I am reading right now are Shadow Warriors: The Irish Army Ranger Wing by Paul O’Brien and Wayne Fitzgerald, and While Nobody is Watching by Michelle Dunne. Shadow Warriors is great book, telling the history of the Irish Defence Forces special forces, and is packed with history & detail which bring just a little of Irelands elite soldiers into the light. As I personally know and have worked closely with many sailors who have gone on to become Rangers throughout my career, its great to see them being recognised in a book like this. I am also very proud to know and work with both authors. This is one more title in Paul’s ever-growing bibliography, and it also very special in that it is Wayne’s first book.

While Nobody is Watching is the first in a series of thrillers by Dunne, and it introduces a character called Lindsey Ryan and her adventures. Lindsey is a troubled woman, dealing PTSD and trying to rebuild her life. This book is one of those reads which makes you want to race to the end, and then race to the bookshop to get the next one! I was privileged to be a beta reader for Michelle, and it was a real thrill be able to walk into a local store and pick up a copy. A creative wonder woman, who is living and working amongst us ordinary folk on Cobh, our Great Island in Cork harbour. I always have one or two books on the go, and I have just received Origins: 21 Poems by Matthew M C Smith in the post yesterday, so I really am looking forward to reading that. Matthew is the Editor of Black Bough Poetry in Wales, another publication which is worth checking out whenever one gets a chance.

My favourite childhood book was The Hobbit by JRR Tolkien. I was a total book worm as a child, and I worked my way through my older siblings collections as soon as I had finished my own. I read The Hobbit for the first time, about the age of 10 or 11, and I was hooked completely. I have always loved Tolkien since, I think I have read almost everything he created from The Adventures of Tom Bombadil to Unfinished Tales of Númenor and Middle-Earth which was compiled by his son Christopher. The Hobbit created my love for everything sword & sorcery and high fantasy. I even have several thousands of words of a draft of my own high fantasy novel, which has grown from a series of short stories I wrote, and which I go back to from time to time.

I don’t have a bookcase at the moment! But the first and last titles in my various stacks and boxes are A Short History of Nearly Everything by Bill Bryson, and the simply beautiful The Book of Barely Imagined Beings by Caspar Henderson. Bryson’s work is truly special and I find that that I enjoy it more which each re-reading. Henderson’s book is incredible, that’s putting it mildly. Just absorbing and astonishing read, worth every seconds spent in its company! I think it is these both ‘must reads’ for everyone!

A book I return to again and again is The Ragged Trousered Philanthropists, by Robert Tressell. Robert Tressell was the nom de plume of Irishman Robert Noonan, a house painter, born in 1870 in Dublin, who worked most of his life in England and who sadly succumbed to tuberculosis before it was published. His daughter Kathleen managed to have an abridged version publish in 1914, and a original version was published in 1955. It is an incredibly simple and hard-hitting book, it captures a working man life and view of the world as the century turned. I am always amazed that I came to this book much later in life than many others whom I now know to be huge fans of it, but the impact that it has had on me was still powerful. Here, captured in the words of a working man, in a time I had only read about, was a story of unfairness and anger, and yet also compassion and sympathy; there is also humour and history. This book is unforgettable, and it is one of those life changing works.

Your favourite anthology (interpreted here to mean a poetry collection).

My favourite anthology is Peacekeeper by Micheal J Whelan. Micheal is truly an inspiration, a polymath of the first rate. He is a historian, author, soldier, father, a good friend, and a very fine poet. I was first introduced to Michael's work through his book The Battle of Jadotville: Irish Soldiers in Combat in the Congo, 1961, which provided my real grounding in Irish military history of this historic battle and wider conflict, long before later books and films, Michael told the story of these forgotten heroes and his writing helped to bring their experiences and their service to life for me. It was a good bit later, when I read Peacekeeper, his first collection of poetry and it was in all honestly a revelation to read such strong poetry from a serving soldier of the Irish Air Corps.

There is an honesty, rawness and beauty in his work. There is so many points of truth within its pages, and it shines a light into the dark corners, where horrendous things have occurred and been inflicted on many innocent people. Micheal served overseas on United Nations Mandated missions, where in countries torn apart by war, he bore witness to the extremes of humanity; from the innocence and joy of children playing in the hills & paths of South Lebanon, to the appalling aftermath of civil war and genocide in hills of Kosovo. This anthology is powerful and moving, it speaks to the unspeakable and yet shows the hope and the goodness of simple, ordinary people, who can do extraordinary things. In keeping with Michaels character, the profits of the proceeds from the sale of this book will be donated to the veterans groups – Organisation of National Ex Service Personnel and the Irish United Nations Veterans Association.

Peacekeeper is another book which for me placed a bookmark in my life, its one of the ones I will remember and treasure for ever.