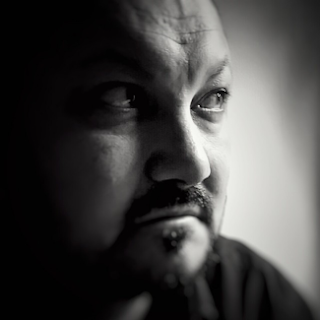 Syllabic poet Mark Antony Owen writes exclusively in nine original forms – sometimes, with variations. His work centres on that world where the rural bleeds into the suburban: a world he calls ‘subrural’. Based in East Hampshire, Mark is the author of digital-only poetry project Subruria, as well as the founder, editor, designer, sound engineer and publisher of iamb. Website: markanthonyowen.com Twitter: @MarkAntonyOwen  @Subruria  @iambapoet

I will forever recommend Jeanette Winterson’s Oranges Are Not The Only Fruit. A truly transformative novel for me, and the one book I always credit as the reason I became a writer.

A book that you started but never finished

Beelzebub’s Tales to His Grandson by G I Gurdjieff. Every bit as complicated a read as the book itself warns it will be at the start. Similarly (though no warning is signalled): A Treatise on Cosmic Fire by Alice A Bailey. What can I say? I read – or tried to read – a lot of metaphysics in my twenties.

Whatever Claire Askew’s second collection of poetry will be titled! Can’t wait to lay hands (and eyes) on this. Especially as her debut, This Changes Things, ranks among my favourite poetry collections of all time.

A book that you feel is underrated and deserves more attention

Antonia White’s Frost in May. The story of a young girl struggling with conversion to Catholicism (based on the author’s own traumatic experiences). Considered a classic among those in the know – although those in the know seem few and far between.

A book with personal resonance

Dickens’ Great Expectations. How I saw myself in the character of Pip. Maybe every kid from humble beginnings needs a hero such as he. Sure, he makes a dick of himself for a while (most young men do). But there is redemption, of a kind. We all need redeeming.