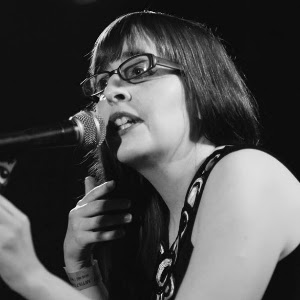 Elizabeth McGeown has been published in Banshee and Abridged. She is the All-Ulster slam champion, has competed in the All-Ireland Poetry Slam four times, and represented NI at the 2019 Hammer & Tongue UK Slam Finals in the Royal Albert Hall. She received funding from Arts Council of Northern Ireland and The National Lottery to work on her first full-length spoken word show.  Twitter: @candyseyes  Facebook: Elizabeth McGeown Writes Speaks Sings

I used to always only read one book at a time because I felt each book deserved my full attention and didn't want to water down the experience, but that changed recently with the introduction of poetry into my life (as some poetry books actually suit dipping in and out rather than reading cover to cover) and a new job where we're allowed to read at quiet moments. Therefore, my current 'work read' is Wild Swans by Jung Chang which I've had in the house for over three years but was always daunted by, as it's around 700 pages and I was worried the 'living history' aspect would be too dry for me. I'm used to reading fiction.

I'm about halfway through at the moment and this tale of three generations of Chinese women has already touched on foot-binding, the practice of concubines and their place in the hierarchy of Chinese society, remarriage outside the accepted social structure and I've reached the 1960s section which is focusing on Red China and Mao's seemingly arbitrary rules trapping his citizens in cycles of famine, paranoia, spying on each other and almost laughable propaganda in order to keep his position as the Chairman of the Communist Party.

At home I've just borrowed Solar Bones from the library, as I hear it's a well-respected recent Irish novel but haven't started it yet. Poetry-wise I might start Ilya Kaminsky's Deaf Republic soon.

Haha all of them! I went to the library once a week and although I could only get three books out at a time on my card, when I wanted more my parents let me use the spare spaces on their cards. If we're talking about formative childhood which to me is 10 and under I read a lot of Enid Blyton, Roald Dahl, The Chalet School series and owned a lot of these so reread them many times. I was really interested in the seesaw nature of female friendships so ones that stand out in my memory for rereading would be White Boots by Noel Streatfeild which I think appealed to me for the competitive aspect (the details of skating competitions) and the rags-to-riches element where Harriet - undernourished because of poverty and recovering from a long illness - is told by her Doctor to take up ice skating. She meets Laila at the rink and soon is invited into Laila's world of private tutors, new clothes, skating competitions and satisfying meals. But then Harriet starts to thrive and jealousy rears its head... Also The Fiend Next Door series, Hating Alison Ashley by Robin Klein, Heidi by Johanna Spyri... Only now realising the similarities!

Probably the first history book I really engaged with was Bury My Heart at Wounded Knee by Dee Brown, which I read in university as part of a module on The American West. It covers mostly the late 19th century (with some backstory) and the gradual reduction of Native American territory because of Manifest Destiny, leading to various bloody battles and the setting up of reservations. It's not an easy read, detailing the gradual erasure of tribes, language, land by 'legal' methods and in light of the actions of today's American Government is something I would recommend everyone read. I've given it as a gift to a few friends, mostly male, now I think of it.

I recently read Constellations: Reflections From Life by Sinéad Gleeson and if I had more money, I'm sure I would gift it to a few people so consider this my recommendation! Beautifully written account of a woman and her physical body in Ireland throughout a life taking in illness, recovery, wellness and the significant moments in-between.

I'm very much a re-reader, or I used to be before life got in the way and the internet destroyed my attention span! I used to read Stephen King's The Stand (about a plague that wipes out 99% of the human race) every time I had the flu. Maybe I should read it again, it probably has a chilling resonance in light of the Coronavirus scare... I love re-reading long books. I've read Gone With The Wind many times and would like to re-read Stephen King's IT when I have time, it's one of the most accurate depictions of childhood I've read along with To Kill a Mockingbird. All of the above (except Mockingbird) are around 1000 pages and have strong elements of characterisation and world-building. Killing the majority of the human race and recreating society from scratch? That's world-building!

So many! I've found a few books that are really well-known in America have barely scratched the surface here. The Chocolate War by Robert Cormier (for older teens) and The Girl with the Silver Eyes (pre-teens) by Willo Davis Roberts are school staples with my US friends but very few people here seem to have heard of them. They deal with themes of bullying, isolation and being different and I would recommend them to adults as well as the age groups mentioned above. For adults I would also recommend The Passage trilogy by Justin Cronin which again, seems to suffer from not being well-known here. I was bought Book 1 in the series as a gift by an American friend and it's a fantastic century-sweeping post-apocalyptic supernatural horror. Don't like zombies or vampires? Imagine if they were combined!
Posted by Colin Dardis at 06:01