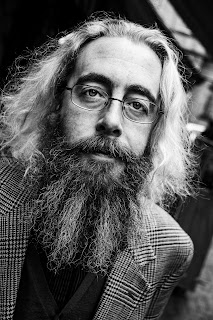 A scriptwriter and comedian by profession John Moynes eventually turned to poetry in an attempt to earn even less money. He is currently worked on a follow up to his debut collection 'Scenes of Moderate Violence' (Unbound, 2019). You can find him on Twitter: @JohnMoynes

What book are you reading right now?

The Mammoth Book of Apocalyptic SF, edited by Mike Ashley. Disappointingly, it doesn't quite work. Grouping science fiction by story subject rather than writing style means you end up with a mish mash of classic SF, through late 20th century dystopia through to contemporary data paranoia. This wouldn't normally be the end of the world, but in this case...

The Lord of the Rings. I read this on a loop from the ages of eleven to fourteen. I loved everything about it. I picked it up again in my late twenties and the love had gone completely. Either I had changed or the book had. Probably I had. People would have said something if a widely read story suddenly remade itself over the course of a decade.

Poetry in Motion, Alan Bennett. There are many fine anthologies of poetry out there, but how many also include essays by Alan Bennett about the works and their creators? Very few I'd wager. Almost none.

A book you have given as a gift.

Constellation of Genius, Kevin Jackson. A joyful romp through the culture and life of 1922. It's got James Joyce, Louis Armstrong, Alfred Hitchcock and the end of the Ottoman Empire, which is more than enough to keep me entertained.

Moby Dick. I've started it three or four times. I have now finished starting it, I won't be going back. People keep telling me that if you stick with it long enough it turns into the Great American Novel, but they're all liars.
Posted by Colin Dardis at 07:12